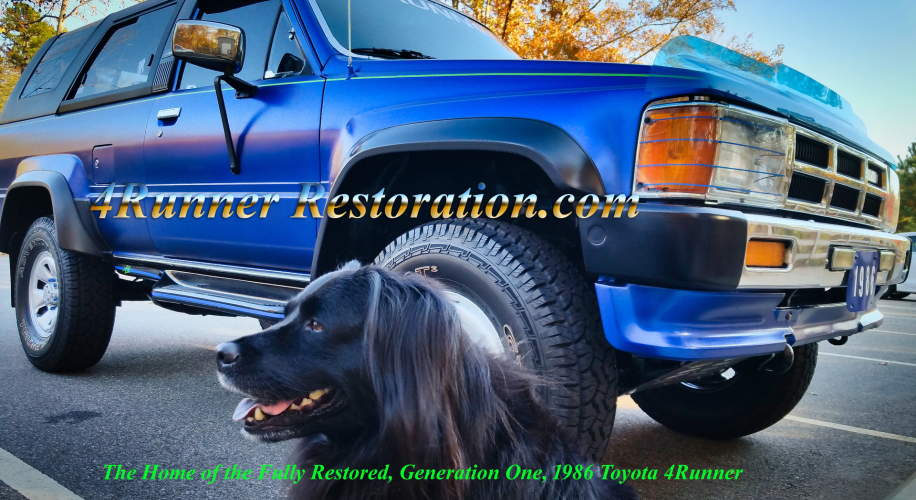 The first part of this restoration, was the main drive train, which was completed a few years ago. This consisted of a brand new 22RE crate engine, which was built from the ground up using a NOS stock block that was in inventory in Washington state, but had never been used. (An amazing story behind this.)This block was then shipped to a specialized Japanese engine building facility in upstate NY. The new crate engine was then built from the ground up using ALL brand-new components, including a new crankshaft, ALL new bearings, new rods, new pistons and rings, a new double metal timing chain and sprocket, a new harmonic balancer and a new oil and water pump. The head portion of the engine was manufactured brand-new by the same engine building facility in NY, which completed the final head assembly to the block. The new crate engine was then shipped to the Toyota engine installation facility in Pittsburgh, PA, which installed the engine into the truck.

The automatic transmission was also restored at the same time that the engine was done. The trans was completely reman'd-to-new using all brand-new components under the Toyota Platinum Trans Rebuild program. This was completed at the largest transmission rebuilding facility in the US, which is located near Pittsburgh, PA.

We also rebuilt the truck’s front and rear suspensions, including all new shocks, a new front sway bar, and new rear leaf springs including the addition of Add-A-Leaf helper springs. This gave the 4Runner the perfect, level ride, and an approximate 2” lift. These new rear springs are rated to support a rear cargo weight of 750 lbs or a total payload weight of 1,850 lbs.

This work was completed on the 4Runner at exactly 120,000 miles on the odometer.

which includes 19,634 miles on the restored drive train components.

The second part of the restoration of the 86’ Toyota 4Runner, was a much more extensive project and took approximately 18-22 months to complete. This included the removal of the engine and trans, and the complete restoration of the frame.  The frame was media blasted down to the bare metal, then acid primed the steel, (which covers the frame in a rock-hard base coating) then paint primed, then painted and then a final ceramic coating was applied to the frame.

All necessary exterior body work was also completed on the truck, and the truck was repainted, including the engine bay, under the front hood, (and new hood insulation was also added) the door jams and the undercarriage including all new SEALED wheel wells and carbon fiber fender flares.

All of the other suspension components were also restored and replaced as needed. New fuel and brake lines were installed, new front pads, calipers and rotors were installed and new rear shoes and drums were installed. The front brake calipers and the rear brake drums are also ceramic powder coated as are the original Toyota 4Runner wheel rims (see pictures on Home Page.)

A new stainless steel complete exhaust system was installed, from the new front headers all the way back to the chromed exhaust tip.

In addition, all of the engine bay components have been refurbished or replaced, including;

NOTE:  Many of the new components which were installed under the hood,

may include a manufacturer's limited lifetime warranty, which may be transferrable to the new owner.

All restoration documentation will be included in the sale.

For the exterior, any required body work was completed, and the truck was then base painted and then 'dipped’ using a gun sprayed, Deep Sea Pearl Blue, liquid wrap (a.k.a. the 'dip'.)

The dip is a Deep-Sea Blue Metallic Pearl coating, with a dip clear coating as well. What really makes this 4Runner stand out, is that the exterior now has a blue anodized metal look to it, and the blue color will hyper shift to various shades of blue, depending on the lighting or sunlight. And the blue pearls in the dip, really stand out in the bright sunlight.

The exterior of the truck was also striped in a bright lime green pin stripe which offers a perfect contrast to the Deep-Sea Blue Anodized color of the truck’s body.

The front grill and headlight doors were also replaced with new, original Toyota OEM components and new Lexan polycarbonate headlight wrap-around clear headlight protectors were installed, which protect the headlights and the side marker lights from being impacted by road debris.

New Toyota genuine carbon fiber rock shields were installed, on the leading-edges of the rear quarter panels, as well as new carbon fiber fender flares which were installed on all four fenders. These fenders were also silicone sealed to the body flare, which prevents any dirt, water, salt or other road debris from getting caught or lodged under the flare and thus rusting out the fenders.

New wheel well liners were also installed and were completely sealed with aluminum/fiberglass tape, which also prevents road salts, dirt and mud from getting trapped between the inner wheel wells and the interior portions of the fender body of the 4Runner (which is another leading cause of fender rust-out.) In addition, the wheel wells were also coated in a water-proof Rhino coating which completely seals and water proofs the wheel wells.

All exterior window trims and the B-pillar side trim panels were redone in a carbon fiber wrap and new original Toyota 4Runner B-pillar emblems were installed.

All of the fiberglass roof seals were replaced and properly and permanently sealed.

The interior of the 1986 Toyota 4Runner was also redone, which included new carpeting, and re-upholstered memory foam front seats with premium, high-end blue anodized metallic-look seat covers. The frames, tracks and locking mechanisms of the front seats had also been completely redone and repainted. All of the interior trim pieces were also redone in the original Toyota Factory blue color. The interior trims of this vehicle now look like they just came right out of the factory! Furthermore, all of the interior seat trims and interior panels and trims, now have a beautiful, satin clear coat on them, that will protect these pieces for years to come and eliminate the need for detailing products like Armor-All or other similar products. And this clear coat is a permanent UV protectant coating, which will always protect these trims from sun UV fading.

The trucks (factory original) rear seats had been originally covered in a protective plastic since the truck was new way back in 1986 and had been folded down and covered over (to protect the seats and to expand the truck's rear cargo area), for most of the truck's life. Because of this, these seats are still in near perfect, excellent condition. These were covered in the new anodized blue metallic type seat covers to protect them and to color and pattern match the newly upholstered front seats. (see interior pictures on Home page.)

New Toyota Logo projector door courtesy lights were installed on both doors which automatically turn on when the doors are opened, to help illuminate the area beneath the door side steps. (see pictures on Home page.)

A new high-performance Jensen hide-away & removable faceplate CD sound system (with remote) was installed. All of the interior components were also completely refurbished, including all seat trims and side panels.

The windows were tinted with photo-chromatic window film, which will lighten or darken as needed according to the brightness of the day outside. The rear retractable window, is covered in a one-way 'Howling Wolf' silhouette window film graphic.

Anodized metallic looking mats were installed, (which matches the exterior blue anodized look of the truck) as well as new interior accent/mood lighting, which can be changed or controlled via an included remote-control unit and offers multiple interior accent lighting colors.

The 4Runner was NC State inspected in 2020 and is current on its inspection and registration.

This restoration was a complete rehab and restoration of every single component and square inch of this 1986 Toyota 4Runner.

Anyone purchasing this vehicle will not be disappointed as to the quality and extensiveness of this 4Runner restoration.